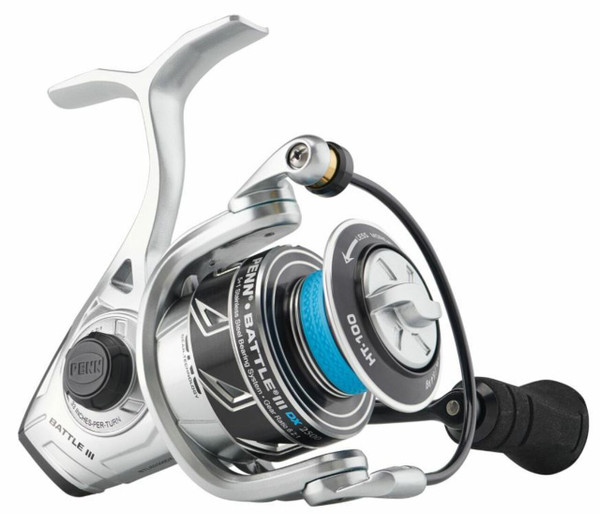 HT-100™ CARBON FIBER DRAG SYSTEM:
Saltwater fishing requires drag that lets you work with the fish, not against it. Our high-tech carbon fiber drag washers are lubricated with PENN’s proprietary grease to ensure that your first catch reels in as smooth as your last, no matter how heavy the load. Engineered with longevity in mind, you can pull in 100 miles of line off of the reel with no wear on the washers.

FULL METAL BODY AND SIDEPLATE:
Tough from the inside out, the Penn Battle III DX rigid framework keeps gears protected from saltwater and always in alignment.

CNC GEAR™ TECHNOLOGY:
When it comes to crafting saltwater spinning reels, precision is the key. That’s why we use state of the art software and CNC machinery to cut the Penn Battle III DX drive and pinion gears straight from the metal.

Compared to gears fashioned from molds, the Penn Battle III DX is not only stronger in design but also more accurate in alignment. With true alignment comes flawless performance and a salt water spinning reel that can endure the most formidable of elements.

SUPERLINE SPOOL:
No backing needed on this “braid-ready” reel. The Penn Battle III DX comes stock with a tailored rubber gasket to keep superline from slipping.